Are We Proud Parents?
You Bet We Are!

My wife Kim and I are blessed with two very talented, wonderful sons.

My wife Kim and I are blessed with two very talented, wonderful sons. Our older, Alex, is a BSME from the Ohio Northern University, Class of 2017, and is now a Design Engineer for Fecon Inc, a leading manufacturer of cutting-edge equipment for the vegetation management industry. Our younger, Nate, is a current student in the Fisher College of Business Honors Program at The Ohio State University, and a member of one of, if not the, most prestigious college marching bands in the nation, The Ohio State University Marching Band, also known as The Best Damn Band In The Land (TBDBITL).

During junior high and high school, Alex was a player for Cincinnati United Premier (CUP) on one of the top soccer teams in the country at their age, so after several years traveling the country to support him, we now spend our weekends, at least as many as we can, heading to Nate’s performances. One of our favorite things to do is head 90 miles north to Columbus, Ohio to be at Skull Session followed by an Ohio State Buckeyes Football game, where we get to see Nate and his TBDBITL bandmates do what they do better than anyone else. A video posted on ESPN’s Facebook page of them doing ‘The Floss,’ from their ‘Dance, Dance, Dance’ halftime show, has over 39 million views alone and that doesn’t count all the other posts, other Internet sites, and television. Talk about going viral! Go Bucks!

First done in 1957, Skull Session is a huge pep rally held at St John Arena.  It originally served as a final music rehearsal for the band prior to their performance on the field but has evolved into one of the most anticipated game day traditions at The Ohio State University.

The band marches over to St. John two hours and twenty minutes before kickoff and bursts into the arena to the sound of the ramp cadences and the cheers of thousands of fans. For the record, if you haven’t been in the southeast entrance stairwell to see the band enter, you haven’t fully experienced a Skull Session. After a few short ‘cheers’ from different instrument sections, the band takes their seats to play “Fanfare for a New Era” as the football team arrives. The head coach, now Coach Ryan Day, an assistant coach, and one of the players each speak briefly to the fans before they depart for the locker room to begin reading for kickoff right across the street in Ohio Stadium.

As the team exits, the band plays “Across the Field,” first softly and slowly, then up to the usual pace and volume. Other Skull Session traditions include “Eternal Father, Strong to Save,” also known as “The US Navy Hymn” and “Hang On Sloopy.”

The band then performs a final musical run-through of its pregame and halftime shows, previewing the exciting soundtrack the band will be providing in Ohio Stadium that day. Before exiting St. John, the band strikes up “Across the Field” one more time to hype up the fans as they go to cheer on the Buckeyes.

After Skull Session, weather permitting, the drumline moves to the Block O grass area outside on the south side of St John Arena. Fans of all ages, family members, friends, and the cheer team gather round as they put on an exciting and fun performance set to a mash-up of popular music. After that, the members get a few minutes to relax and spend time with family and friends before the whistle sounds and they are off for the stadium and the awesome ramp entrance. The included picture was taken during those few minutes break.

Why Are We So Proud Of Nate?

The Ohio State University Marching Band earned its name as The Best Damn Band in the Land by developing many famous marching band innovations, including floating and animated formations, script writing, and the fast cadence with a high knee lift. The band’s Script Ohio is considered by many to be the most memorable tradition in college band history.

Carrying on the tradition of excellence that dates back to the late 1800s, the 228-piece “Pride of the Buckeyes” is one of the few college all-brass-and-percussion bands in the U.S. and is acknowledged as the largest of its type in the world. An ensemble that includes student members from all over the country, the OSUMB strives to continue a legacy of hard work, determination and Buckeye pride while performing at Ohio State football games and other events during the fall semester.

Our son Nate is a Tenor (percussion quads, multiple drums) in J Row, which is part of JI Row comprising the Ohio State Drumline.  They are the first to come down the entrance ramp and enter the field for each home game, thus their motto of “JI Row – First on the grass.”

Besides performing with the band in front of over 100,000 spectators each home game at Ohio Stadium in Columbus, he has performed at the Macy’s Thanksgiving Day Parade in New York, the Tournament of Roses Parade in Pasadena, The Cotton Bowl in Dallas, for the NFL in Cincinnati and Buffalo, and at many other locations. During the spring semester, he is a member of the Athletic Band, which plays at other sports. 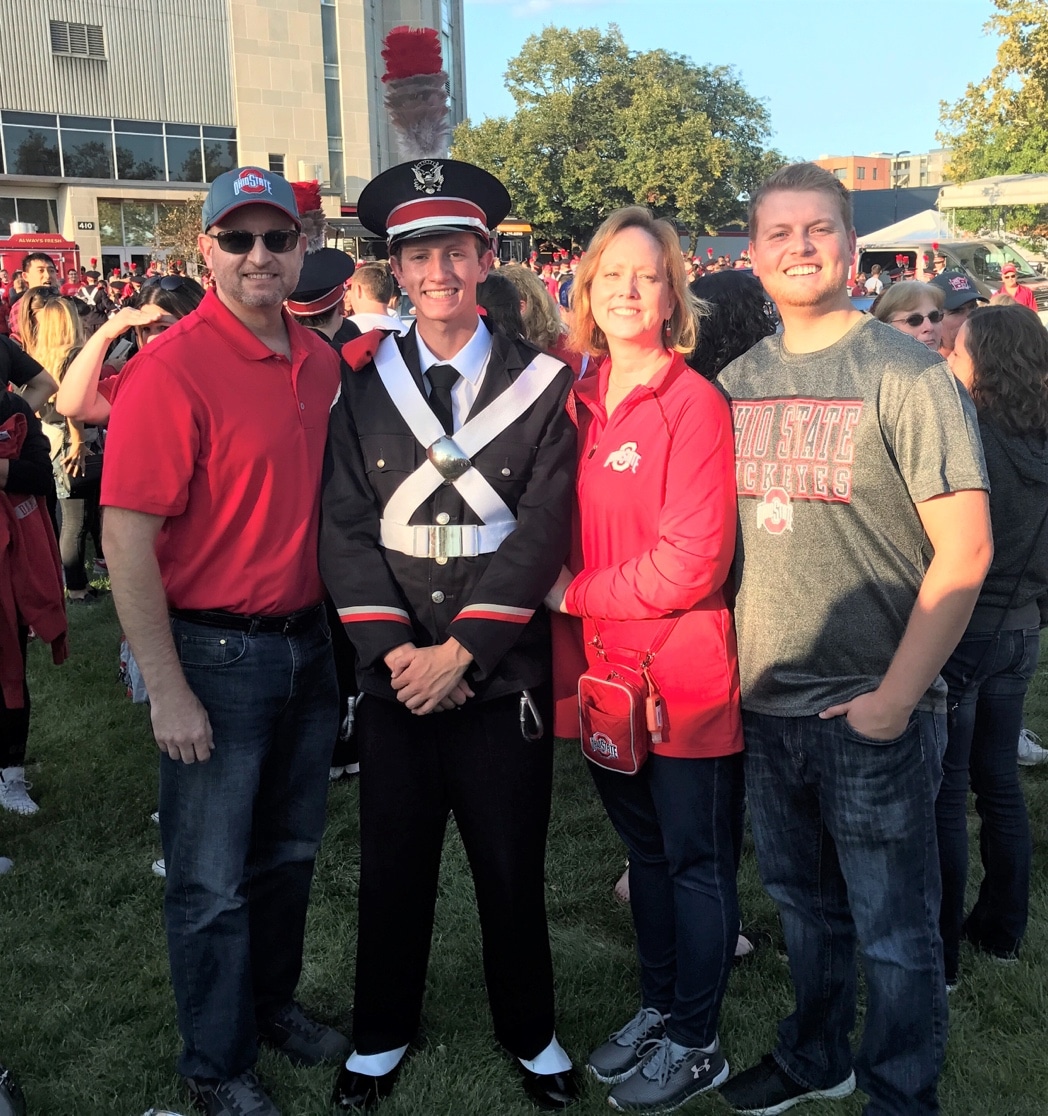 Is Your DD Organization Searching For A Reliable Cloud Infrastructure?

Book your initial consultation with our cloud team.

Your Information Is Safe With Us. GO Concepts will never sell, rent, share or distribute your personal details with anyone. In addition, we will never spam you.